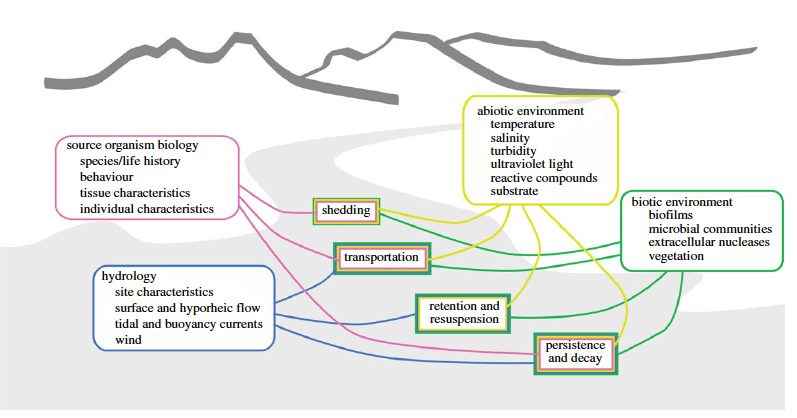 Predicting the fate of eDNA in the environment and implications for studying biodiversity
Jori B. Harrison1, Jennifer M. Sunday2 and Sean M. Rogers1,
1University of Calgary and 2McGill University

Environmental DNA, in which species are detected by DNA isolated from water samples, are transforming aquatic biodiversity assessments in research, conservation, and industrial applications. However, estimating where, when, and how many organisms were present requires an understanding of the complex interactions between the environment and eDNA.

In this review, we discuss the role that differing environments play on the major processes that eDNA undergoes between organism and collection; including shedding, decay, and transport. We highlight how decay and transport models are being developed towards more robust predictions of the fate of eDNA, and conclude with five recommendations for eDNA practitioners.

Figure courtesy of the Royal Society.
Figure 1. Mechanisms influencing the concentration and fate of eDNA in aquatic systems and environmental factors known or suspected to alter their rate and extent of action.